Keeping your mouth clean may be an easy task to do on a daily, but there are times when your toothbrush may not be readily available. Maybe you’ve forgotten to pack it in your bag, maybe you just need a quick cleaning whilst out and about. Know that there are alternatives to cleaning your mouth in a jam. Just keep in mind, these are suggestions when you’re in a pinch – your daily dental routine needs to include a toothbrush, toothpaste and floss.

Rinse with mouthwash. Keeping a travel-sized bottle of mouthwash handy is a great way to clean your mouth and leave your breath smelling fresh. Remember, if you are using Listerine, dilute with water at a 1:1 ratio.

Use floss. Many dentists say flossing is more important than brushing in tooth decay prevention because it removes bacteria and food. Once complete, rinse and you’re done.

Shower your smile. When you’re in the shower, treat it like a water pick system. The warm water is perfect for rinsing debris. Use your finger to clean individual teeth.

Chewing gum. Chew a piece of sugar-free gum for a minute in order to remove food, plaque and bacteria from teeth. Not only does it clean your teeth, but also produces saliva.

Green tea. Green tea contains polyphenol antioxidant compounds that reduce plaque and fight gum disease. It’s easy – drink the tea or use it as mouthwash for a deeper clean.

Munch on veggies. Fibrous vegetables pull double duty on your smile. Crunchy foods like apples, carrots and celery not only clean your teeth as you chew, but vitamin C and A help build strong teeth.

When we have a project to do, we need tools in order to get it done. And the better our tools are, the easier it is to not only complete the task, but to do the best job possible. The same can be said about our dental tools. In order to maintain a healthy smile, it is important to have good tools. Because we use a toothbrush to remove food debris and bacteria from our teeth, it requires proper care in order to be effective. Here are some tips to keeping your toothbrush doing its job properly.

To minimize bacteria, the toothbrush must be kept clean. It should be washed thoroughly with tap water after each use to remove food particles and leftover toothpaste. When stored, keeping it upright will allow excess water to drain from the bristles, less likely to grow bacteria. If you need to store it in a closed container (for example, when traveling), try to dry it using a clean towel beforehand.

From time to time, sanitize your toothbrush with antibacterial mouthwash. You can even toss it in the dishwasher to kill bacteria. There are also professional sterilizers that utilize ultraviolet light to sanitize toothbrushes available on the market.

We all know we’re supposed to floss daily but let’s be honest – most of us don’t. It just always feels like an unnecessary thing to do. But are you sure it’s unnecessary? You may not think so offhand, but then why do you make sure to do it before your appointments? Yes, we are sure you dread when you’re sitting in the dentist’s chair and they ask, ‘How often do you floss?’ While you’re calculating in your head how much you floss and whether or not you should fib to the dentist about your flossing habits, let’s go over why it’s so important to floss daily. After all, taking care of our teeth is important if we want to keep them for as long as we possibly can.

Better than brushing alone. A toothbrush works to removing plaque with its bristles. Brushing alone has one big drawback: A toothbrush’s bristles can’t adequately clean between the teeth or under the gums. That’s where floss comes in, to get in those tiny spaces between your teeth to get the grime out your toothbrush can’t reach.

Protects your gums. Where the gums and teeth meet are where flossing plays its major role. Particles of food can get lodged here, and plaque in this area will harden over time to form tartar, that your dentist will remove with a scraper. Tartar buildup can lead to gingivitis.

Helps prevent other diseases. Gum disease can have effects that go beyond discolored teeth, discomfort and bad breath. Research has shown that the bacteria in an unhealthy mouth can harm the rest of the body, leading to heart disease, diabetes and respiratory illness.

The end of October may feature one of America’s favorite holidays, but it sure isn’t your teeth’s. Yes, it’s Halloween, the nighttime holiday where kids dressed up as their favorite character and hunt the neighborhood for sweet confections. While many parents have echoed the line that candy will rot children’s teeth, there’s no reason to deny children the enjoyment of Halloween candy, but it’s important to supervise them to ensure that their Halloween is enjoyed in a way that keeps their teeth safe. Here are some helpful tips:

Moderation. Use Halloween as a way to teach children about moderation – by teaching children to eat a moderate number of treats, you’ll encourage them to practice moderation in their daily lives. Allow your children to choose the candy they want to eat, but set a limit on the number of pieces, and remove the extras so they can’t be eaten when you aren’t looking.

Snack time sweets. Allow children to eat candy during a fixed time period – rather than an all-day feast, they’ll have a fixed window for candy. This allows them to prioritize their candy enjoyment, minimizes the chances that they’ll consume far too much, and by following treats with brushing, helps prevent cavities.

Hygiene fun. Focus on fun, but effective, dental hygiene. Children often need stimulation beyond simple health to brush regularly and sufficiently, so swap toothbrushes every few months with new, fun characters/colors, and give your children the opportunity to pick their own fluoride toothpaste.

If you have questions about how Halloween impacts your children’s dental health, contact your dentist or ask at your child’s next dental appointment. Help them help your smile.

Visit Great Lakes Family Dental today and schedule an appointment to find out what kind of treatment your teeth needs to be healthier and to look better.  Call 317-841-1111 or www.smilesbygeorge.com.

When we have the chance to improve your smile with dental implants, you will need to realize that while they are made to be quite resilient, you need to take care of them just as much as you do your own teeth. Don’t fret – it isn’t going to be an overhaul of your life. In fact, you may not even notice a difference at all. While you will be given instructions regarding aftercare and upkeep, here is a quick rundown of what you can expect to hear:

Brush and floss twice a day. Just like your regular teeth, implants need to be cleaned and flossed to prevent food particles from invading your gums and implant structure.

Say no to staining. Dental implants can stain the same as normal teeth. Steer clear of smoking, coffee, tea, sodas and wine. Don’t feel you need to avoid them completely – moderation is key.

Mouthwash. Special germicidal mouthwash is often prescribed by dentists for patients with dental implants. It helps reduce the risk of infection.

Dental visits twice a year. Regular dental visits are a part of normal dental hygiene but is especially true for people with dental implants. Your dental implants will need a thorough cleaning and plaque removal to continue to keep their brightness. Along with the cleaning, the condition of your gums, jaw and anchors will be checked.

Caring for restorations is just like caring for your natural teeth. You’ve gone through the process of getting the dental implant – maintain them for a smile that lasts a lifetime.

Visit Great Lakes Family Dental today and schedule an appointment to find out what kind of treatment your teeth needs to be healthier and to look better.  Call 317-841-1111 or www.smilesbygeorge.com. 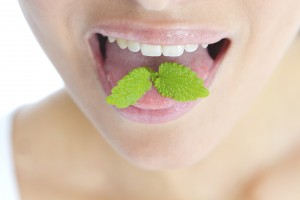 Bad breath isn’t just unpleasant – it can actually a sign of an unhealthy mouth. Typically known as halitosis, it can be the result of poor dental habits, or could be a sign of a much more serious dental or medical problem. Bad breath can be the result of a number of different conditions, but the most common dental causes fall into two groups: bacteria in the mouth and bacteria in the gums.

As you eat food, chewing breaks food into small particles that can become stuck between teeth, around the gums, and on the tongue. As bacteria break down that food, the bacteria can release foul odors, which will be exhaled and noticeable to others. Patients with cavities caused by tooth decay are more likely to have food particles and bacterial colonies present – the cavities provide a protected space for bacteria, increasing the likelihood of odor causing bacteria being present.

Like tooth-born bacteria, patients with periodontal disease are likely to have bad breath. Periodontal disease is an infection within the gums, typically caused by poor oral hygiene. As plaque and tartar build up against the gums, bacterial colonies build beneath the surface of the gums, creating large colonies that not only produce foul odors, but also damage gum and bone tissue, and could potentially cause severe dental issues such as tooth loss.

Because the root cause of bad breath is often bacteria, an antiseptic mouthwash can often help mitigate bad breath – at least for a while. However, it’s important to remember that mouthwash doesn’t necessarily remove all bacteria; it only kills some bacteria for a short period of time. While mouthwash, brushing, and flossing can treat some causes of bad breath, patients with chronic bad breath should be sure to visit their dentist to ensure that no deeper problem is present, such as tooth decay or periodontal disease.

Contact Dr. George Kirtley for an appointment today to get the bright white smile you have always wanted at 317-841-1111 or generaldentistryindianapolis.com.